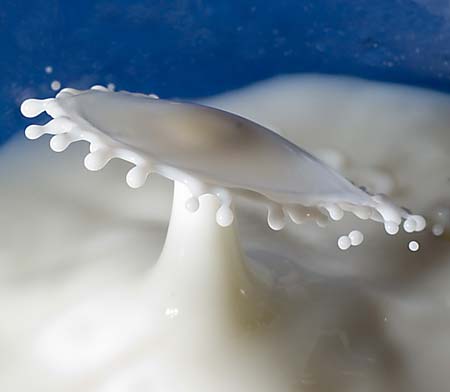 High speed photography requires a very fast flash to stop the motion up close. Camera shutters and studio lights are not fast enough for this special duty, however camera speedlights used at their low power settings typically are dramatically fast enough. The next page is about why this difference, but first, this page shows evidence about the truth of it.

But first, see the 40-second bullet-stopping YouTube video from Gretel Producciones in Spain. In the video, you can catch glimpses of the regular Yongnuo speedlights used to create the included still pictures of the stopped bullets (at about 30 seconds). At lowest power levels, speedlights have incredible capability to stop action. The extreme cases often require timers to trigger the flash accurately at the right instant, and these in the video delay a few milliseconds from the sound of the shot, to trigger the flash when the bullet appears at the expected location. More common photo cases may involve milk drop splashes (a timer makes it easy and repeatable) or stopping hummingbird wings (which don't need any timer).

Lowest speedlight power (for speed) requires lower ambient levels, not dark, but dim, like indoor interiors, or shade outdoors, to prevent ambient exposure from being sufficient to blur the motion. The basic idea of high speed flash photography is that the ambient exposure (shutter speed) can be long and slow, so long as its result is too dim to show any blur. The speedlight flash at low power level is extremely fast and quick, occurring during that longer shutter time. Lowest speedlight power levels to be very fast, and stopped down aperture for depth of field, will require flash distances of only about arms length, but normally should not be a problem.

Then the photo series below compares a Nikon SB-800 speedlight to Alien Bees B400 (160 watt seconds maximum) and B800 (320 watt seconds maximum) studio lights, to show the comparison and difference of how well the speedlight flash stops the motion of a falling milk drop. The Alienbees are great, and relatively fast in the studio flash category, generally extremely adequate for any usual use, with some advantages such as higher power levels and can easily mount accessories like large softboxes or grids, etc, but these studio flash units are NOT speedlights.

The Alienbees B400 is spec'd at 1/2000 second at full power, and 1/1000 second at 1/32 power (t.1), so that's great normally, with power advantage. But camera flashes are speedlights, and at their lowest powers (at closer range) are incredibly fast (and normally are still about 1/1000 second at higher 1/4 power level, very adequate for the kids activities). And the Nikon SB-800 is rated 1/17800 second at 1/32 power, and 1/42600 second at 1/128 power. Speed vs power adjustments in most studio monolights vary in opposite directions than speedlights, and higher power studio units (like the B800) are naturally slower than smaller units (B400), see next page.

A typical flash tube pulse is shown at right. There is a strong fast initial peak of light, and then the intensity falls off relatively slowly (a few milliseconds). That's a bright initial flash followed by less intensity as the drop falls and the trailing tail weakens. Most studio monolights adjust voltage levels lower for lower power levels, which makes low power slower. The flash duration specification is a guideline (not the actual flash duration), measured to when trailing decay is half the peak value, called the t.5 method (shown at right). Speedlights are unique in that they implement lower power levels by still charging to full voltage, but shutting the flash tube off sooner, simply chopping off the tail (next page), which results in much faster speeds (shorter durations). That speed freezes the milk drop splash above. The speedlight is its slowest light at full power, but might be only 1/10,000 second duration at 1/16 power level, which will stop most motion (called Speedlights).

For these pictures, the milk drop falls through a photo-sensor gate, which triggers a timer, which delays for a time corresponding to the milk drop falling 24 inches (about 61 cm), and then it triggers the flash to capture the picture. The timer is adjusted so that the drop has fallen to the exact place where the camera was waiting, 24 inches below. Shutter speed was on Bulb, manually opened typically about 1.5 seconds, ready while the drop was dropped and the flash was triggered, then the shutter was closed. The continuous ambient room light was dim, so that the slower shutter speed would not blur the fast action already stopped by the faster flash. Flash distance was varied in each frame as necessary, to always hold the same metered f/16 exposure, ranging from several inches to about 15 feet for the B800 at full power (ISO 200). The front of the Nikon 60 mm macro lens was always about 4 inches from the milk drop, and was set to f/16 on all frames (even for the SB-800 at 1/128 power).

The ruler markings are cm and mm. The bright streak is the reflection of the flash from the moving milk drop. The trailing tail below the drop shows where the milk drop was at the time when the flash slowly weakened to zero output. The speedlight is called a speedlight because at lower power levels, its output is "chopped off" short to become an extremely short duration.

You can click any picture for a larger photo, which will show the faster speedlight differences more clearly.

Stopping a milk drop which has fallen 24 inches (61 cm)

Speedlight design varies, in the choices of capacitor size and voltage and flash tube diameter and flash tube current. These parameters affect ionization and color temperature, therefore flash color also varies with power level. If the flash levels reach to 1/16 or 1/32 or 1/128 or 1/256 power, I imagine the designer might chose parameters to best average out the color over much of that range. Speedlights are a little more pink at full power and a little more blue at low power (see an example). The color of most studio lights run the opposite direction of that, a difference in their design (next page).

Note that speedlight Full Power is much slower (not truncated at all), and its numbers are an exception, then measured to its half power points called t.5 (standard engineering practice). So the duration Numbers may be shown similar value for Full and Half power, but actual full power duration is more like 3x that, or 1/350 second here. But the other lower levels are chopped off short to be low power, which then makes them very fast, and these numbers would be actual flash durations.

But speedlight 1/2 power is truncated, chopped off. The Full/half spec duration times are shown as about the same number, again only because Full power is t.5, measured at half power points. But actual 1/2 power is chopped off, and actually stops at the 1/1100 second (and does not continue slowly trailing off). 1/2 power is about 3 times faster than full power (speaking of speedights).

Note that if the timer stops every falling drop at the same place at the same time, the velocity must be the same. Falling 24 inches computes to take 0.35 second and reaches 11.5 feet per second velocity at this point. Or 138 inches per second, or 1 inch in 1/138 second, or 1 cm in 1/350 second, or 1 mm travel in 1/3505 second. At close distances, the angular distance causes blur in photos.

So we need a lot of speed to stop fast motion, especially so when magnified by being seen up close. Shutters do not have much capability for this extreme motion. The way it is done is with speedlight flashes (about any camera hotshoe flash model), which can be faster than any possible shutter speed. Then any slow shutter speed can be used (1.5 seconds above), so long as the ambient light is not too bright. The room can have enough light to see, but not too bright. The same picture without flash should be mostly black, to not capture any blur from ambient.

You can click the images for a larger view, and for the studio lights, it's impossible to say just when the faint tail disappears (emphasizes the practicality of the t.5 method). I'm jumping ahead (next page), but the speedlight Full power spec says 1/1050 second, which t.5 (half power points), and its t.1 would be 3x or 1/350 second to the 10% point. We can see the tail is at least 1 cm, which computes 1/350 second (hard to identify the 10% point). But I would judge the speedight 1/2 power motion (above) to be 3 mm, which would be 3x 3505, or 1/1168 second. The spec says 1/1100 second, so our calculation is pretty close, but it involves approximations, like velocity. The spec would instead directly measure the actual curve of the light output on an oscilloscope.

I am certainly NOT knocking the Alienbees in any way. I have four, and they're great flashes, normal studio design, and wonderful for typical studio portrait work, a Best Buy IMO. But they are not speedlights. It is just that attempts to "chop off" the output of a high power flash become much more difficult to implement. Recent advances (the Einstein flash model) are at 640 watt seconds power, but also offering a speedlight mode.

This photo is NOT really an absolute speed test. In that any "measurement" of how much motion is visible is relative to the degree of closeup (how closely we examine it). These pictures are at macro distances.

This closeup size magnification greatly magnifies the fast movement and blur. Which is hardly typical of most other uses for studio lighting. We might not even notice the tiny milk drop if the framed area were a normal portrait view. Your standards then of what is blurred or not would be vastly different from this extreme case. The 11.5 feet/second above is under 8 MPH, but it is a really tough job up close at a few inches, even if trivial at several feet farther out. Stopping a moving object depends entirely on how closely you want to examine that object. However there is a very obvious difference in the relative capabilities of the lights. The technique is, low power on a speedlight (fast), in dim ambient so shutter speed does not blur it.

The flash unit's specifications instead measure the actual duration of the flash directly. Oscilloscopes do that easily, and I see no reason to doubt the specifications (if they say what it was they measured). However the specifications may not mean what you might assume they mean (t.5, next page).

My only point is that high speed flash photography of milk drops is fun, but tough. It is hard to stop them up close, but a thyristor-type speedlight at a low power setting is exactly what you need to do it.

Note that HSS flash is the slowest possible flash, it cannot stop motion. HSS is NOT High Speed Flash, it simply means High Speed Sync. Meaning, it does allow faster shutter speeds (faster than Maximum Sync Speed), but speedlight mode can be higher power level and much faster than any possible camera shutter speed. I think there is no possible reason to consider HSS mode indoors.

Continued on next page, to the Reason why studio lights are slower.

Menu of the other Photo and Flash pages here.